Founded in Silicon Valley in 1969, AMD has become one of the largest semiconductor companies in the world. AMD is currently the world’s second largest supplier of x86 architecture microprocessors and is one of the only semiconductor companies in the world that produces both microprocessors as well as high-end graphics processing units. Since its establishment, GIGABYTE has partnered closely with AMD to bring the latest PC technology to users. GIGABYTE has released the X470 AORUS GAMING 7 WIFI-50 Motherboard to acknowledge AMD’s 50 years of contributions to the field as well as the strong partnership between the two leaders. 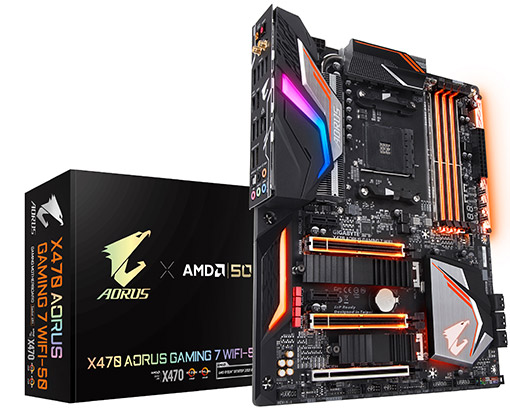 GIGABYTE X470 AORUS GAMING 7 WIFI-50 Motherboard adopts a 10+2 phase, fully digital IR® power design with each phase capable of providing at least 40A to fulfill the power demands from overclocking or for power hungry processors while ensuring solid performance and system stability when running CPU-intensive applications. Fins-Array Heatsink with Stacked Fin architecture utilizes a Direct Touch Heatpipe to improve the contact between the thermal module and the power module, drawing heat away from the PWM more quickly for unprecedented heat dissipation.

Furthermore, GIGABYTE X470 AORUS GAMING 7 WIFI-50 Motherboard sports a metal backplate, strengthening and preventing bending of the PCB while also enhancing heat dissipation. The ultra sleek thermal armor goes together flawlessly with the integrated I/O shield for impressive aesthetics as well as easy installation. Built-in USB Type-C, ALC1220VB, ESS9118 SABRE DAC along with 802.11ac Wave2 WIFI, and plenty of other features make this AMD platform motherboard the top choice for those looking for a gaming motherboard.

“Since GIGABYTE was founded, we’ve partnered closely with AMD to push for innovation in PC technology,” said Jackson Hsu, Director of the GIGABYTE Channel Solutions Product Development Division. “To honor AMD’s 50th anniversary, GIGABYTE has released the brand new X470 AORUS GAMING 7 WIFI-50 Motherboard for users to take the lead and experience ultra-efficient performance from current and next gen. level processors. In the next 50 years, GIGABYTE AORUS will continue to develop the best quality motherboards for users to bring out the best performance from AMD processors on their systems.”