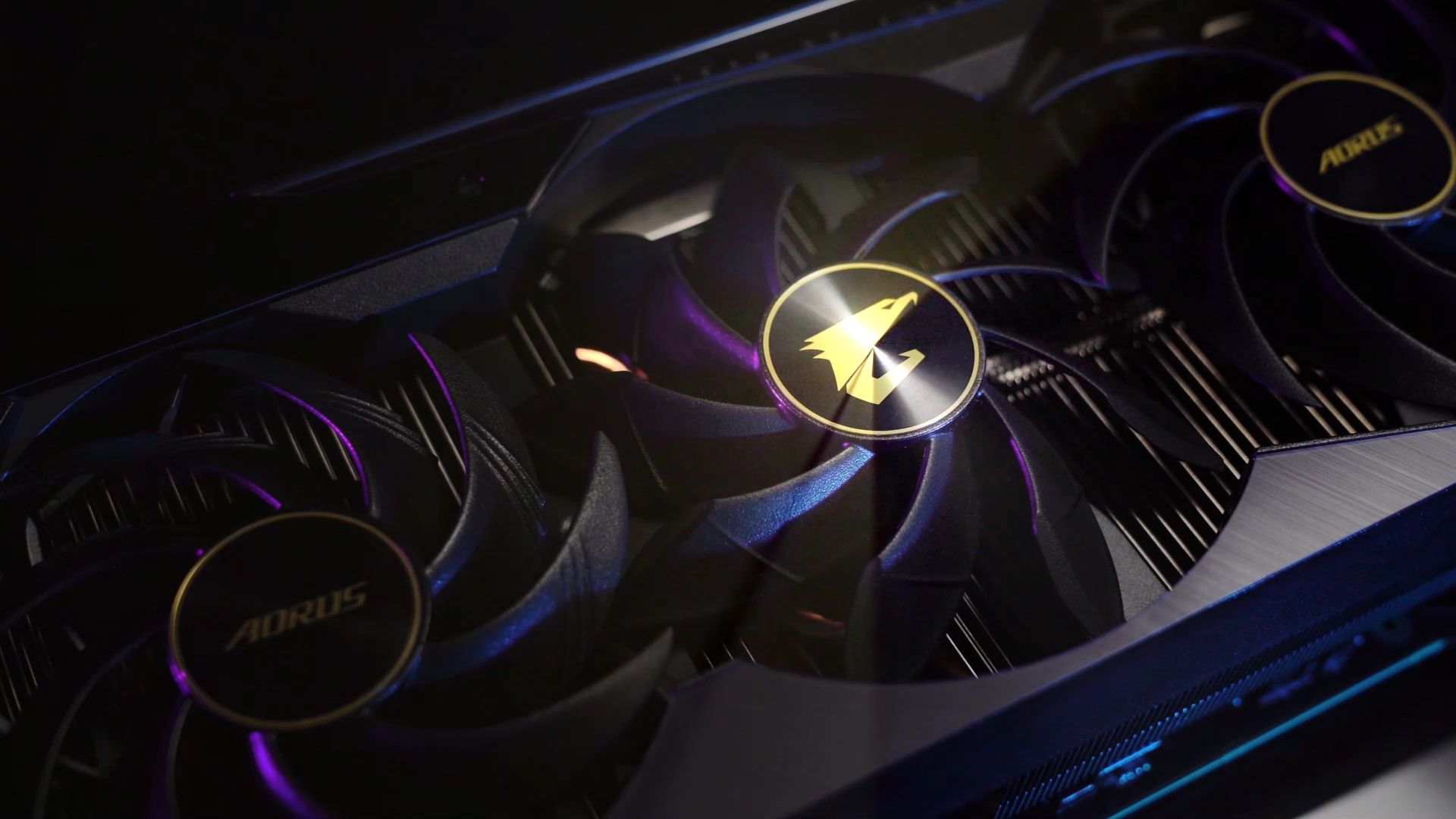 You may have known that the latest generation of NVIDIA RTX graphics cards have been announced and there’s only one week or so left until launch and you’re probably now taking a look at those graphics cards to decide which one you should go for once it’s available.

AORUS has come up with full graphics cards line up with RTX 3090, RTX 3080, Ti series GPU and cooling is the thing that makes AORUS RTX 30 series stand out from the crowd. Let’s take a closer look at how AORUS managed the tremendous heat from Ampere to drive the ultimate performance for gaming. 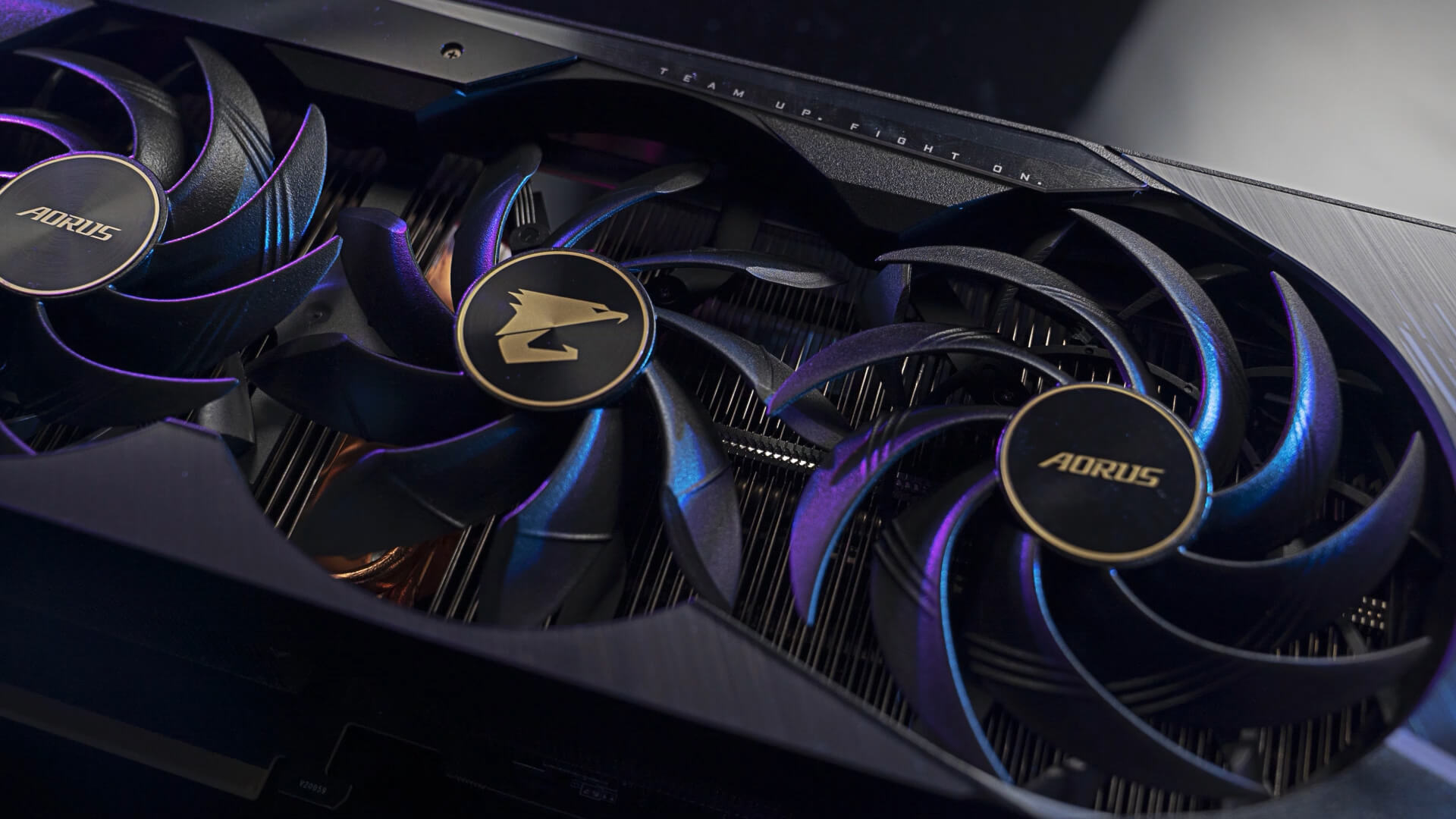 Before we explain MAX-Covered Cooling, let's talk about why AORUS focuses on thermal so much on the upcoming RTX 30 series. Of course, the performance claimed by NVIDIA’s CEO, Jensen Huang, on the new RTX 3070/3080/3090 shocked the world with unprecedented performance gains, but there’s more to the performance than meets the eyes.

There's one more critical component behind the superior performance: The TDP. The more power the GPU has, the more power it will consume, and in tandem, more heat will be generated.

This has been shown by the preliminary RTX 30 specs revealed by NVIDIA: both RTX 3080, RTX 3090, and Ti series are the beasts consuming more than 300+ watts at peak performance, not to mention how much more power can be consumed after GPU overclocking. This means that without a superior cooling design on the next generation of graphics cards, you won’t be able to take full advantage of its capabilities. 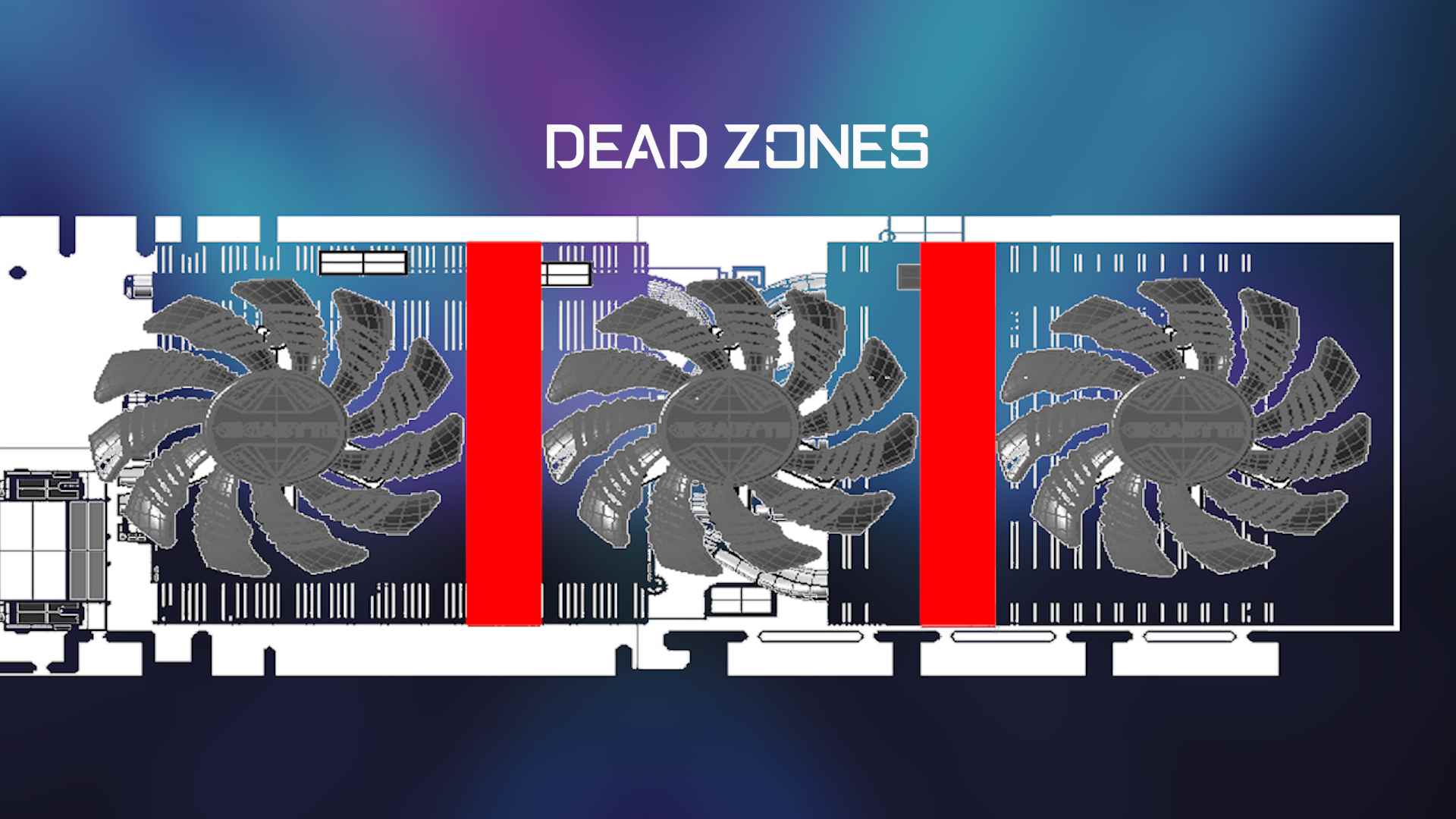 So as explained this is why AORUS has focused our efforts on the thermal cooling design for the next generation of graphics cards. And with that AORUS has launched our new cooling technology called "MAX-Covered Cooling". 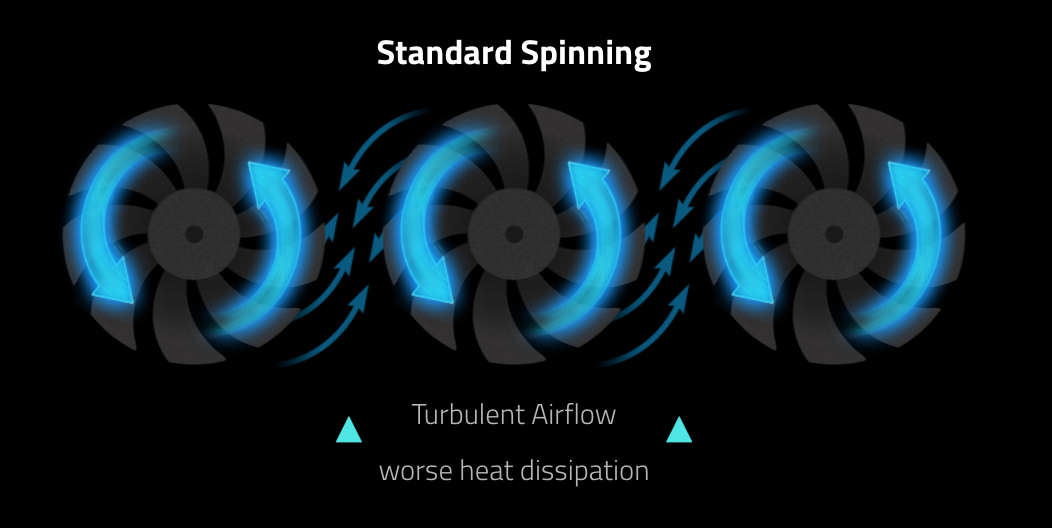 To solve this problem, AORUS had done two things to improve thermal efficiency: Enlarge the GPU fans & have the fans in a stacked configuration. Larger fans deliver more airflow to the heatsink, and the stack fan design, it eliminates the dead-zone of airflow found on the traditional graphics card and provides max coverage airflow coverage across the heatsink. 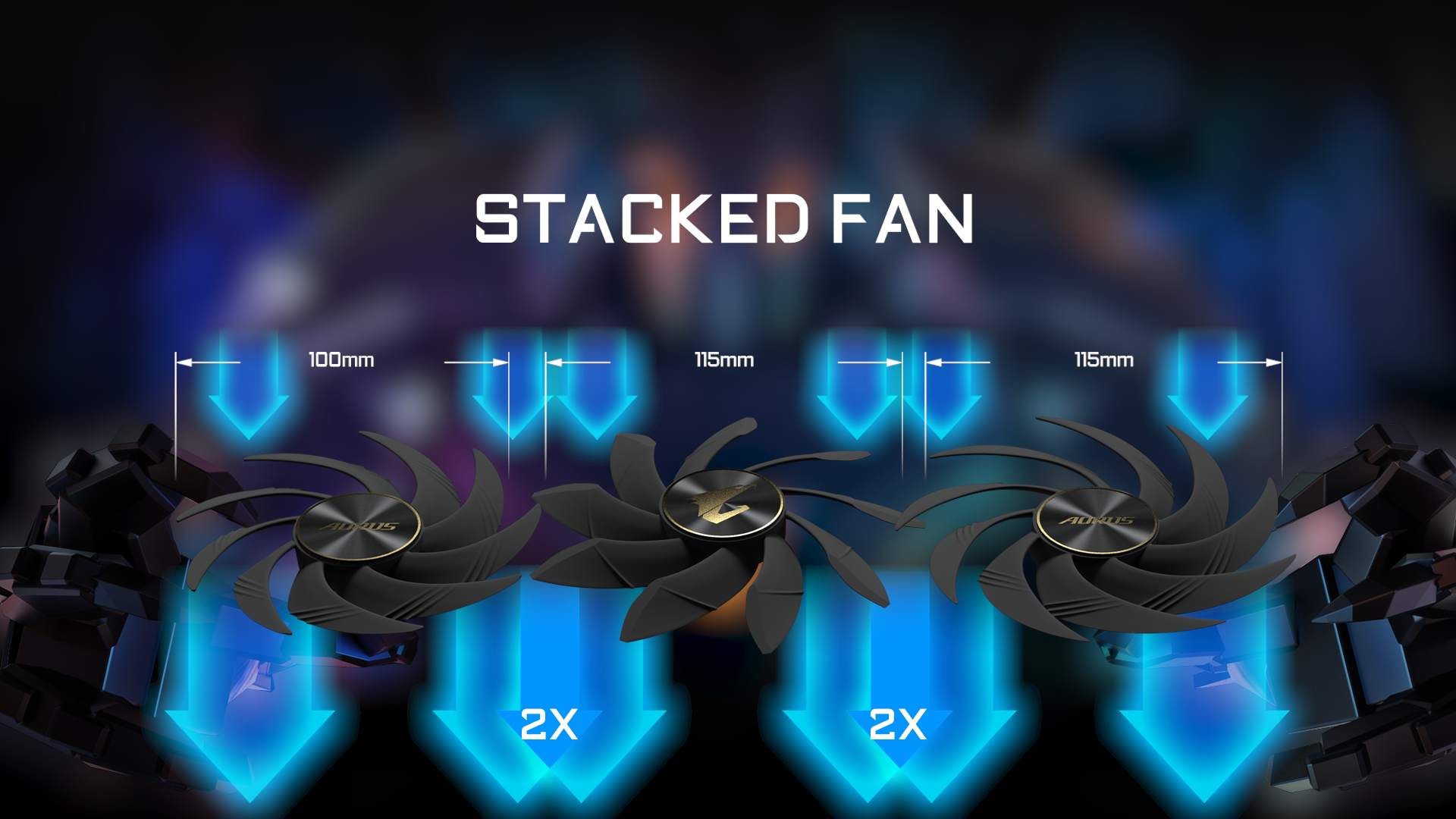 Under MAX-Covered Cooling there are other two unique features: Wind Claw & Alternate Spinning. Wind claw is a stationary fan blade beneath the very left and right fan for channeling the airflow into the heatsink, which could drastically increase the airflow pressure. 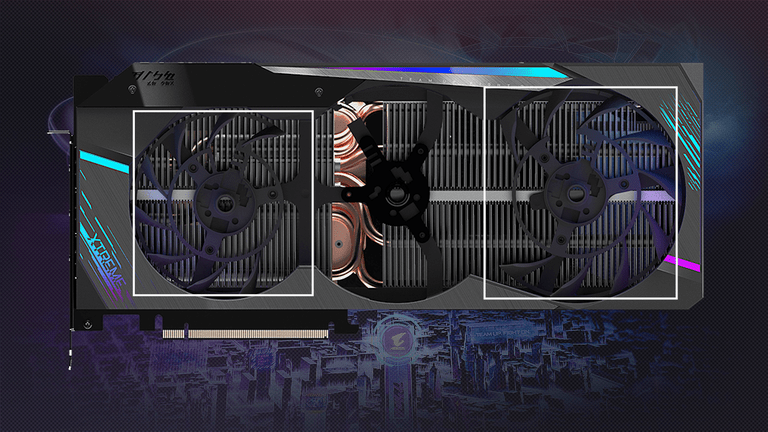 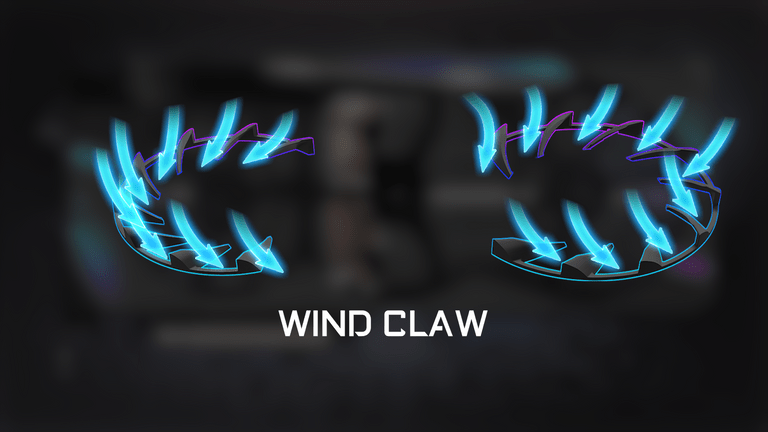 The alternate spinning is the technique AORUS has been used from GTX 10 series, By changing the direction of rotation in the middle fan, the turbulence between each fan could be eliminated and guarantees better heat dissipation. All of these exclusive cooling features make MAX-Covered Cooling the ultimate cooling solution for RTX 30 series GPU.

Another exclusive feature that makes AORUS RTX 30 series cards unique among our competitors will be the use of a large-size vapor chamber directly contacting the GPU die.

You could think of the vapor chamber as a much larger size of heat-pipe which provides efficient heat transfer compared to traditional aluminum or copper plate. The vapor chamber can rapidly dissipate and transfer heat generated from the GPU to the heat sink via heat pipes and the MAX-Covered fans will follow up and provide full coverage cooling across the heatsink. 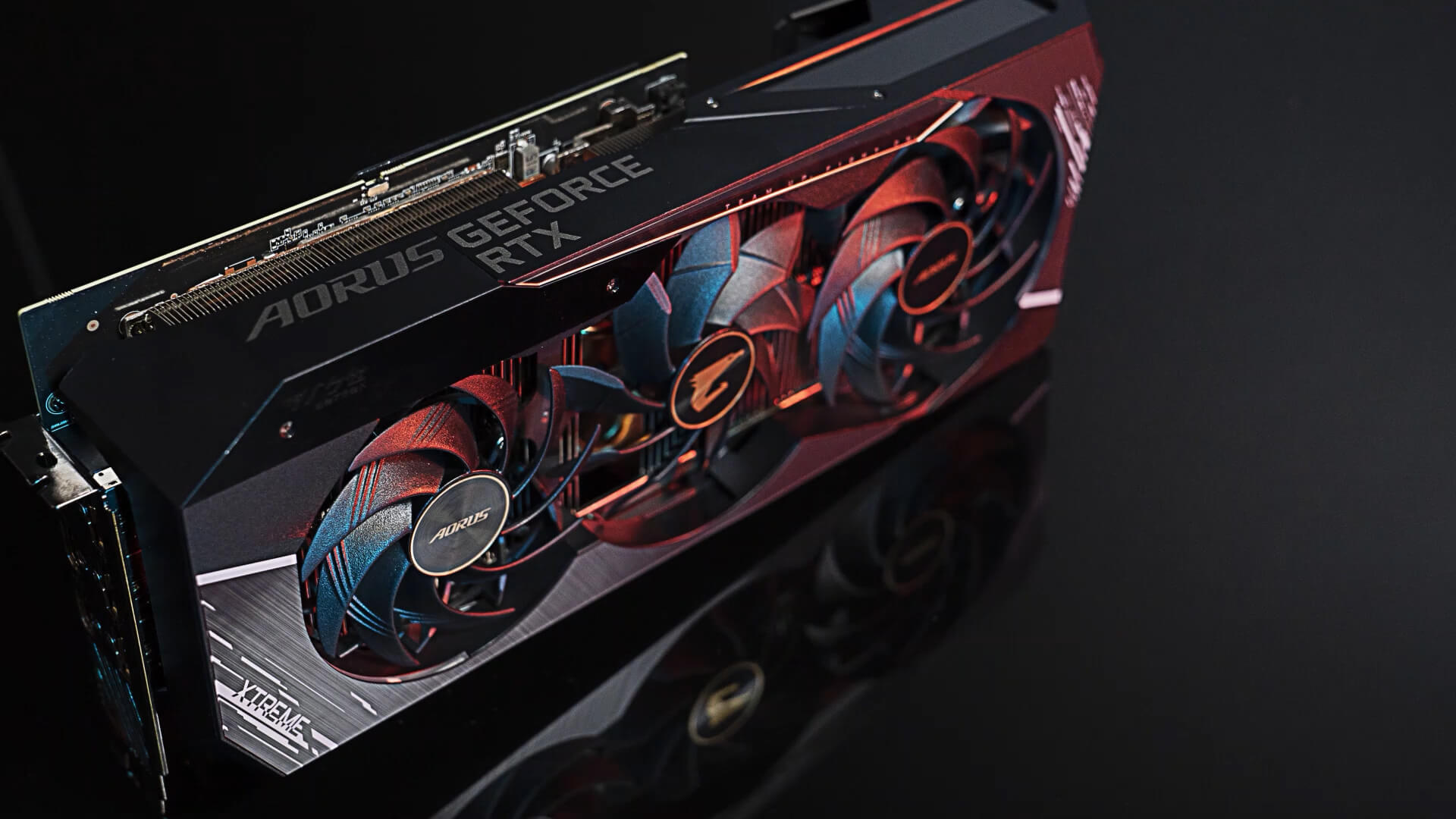 AORUS had also brought a brand new aesthetic for RTX 30 series graphics cards. The blacktop cover was decorated and accented with a gold AORUS logo on the fan, which looks to give a luxurious contrast.

However, AORUS didn't forget the importance of RGB and integrated it within the top cover by hiding the LEDs to the top also the very left & right of the card. The RGB lighting on the top highlights the AORUS slogan "Team Up, Fight On". The RGB light on the left & right come from trim, which illuminates the spinning fans bringing exciting visuals. 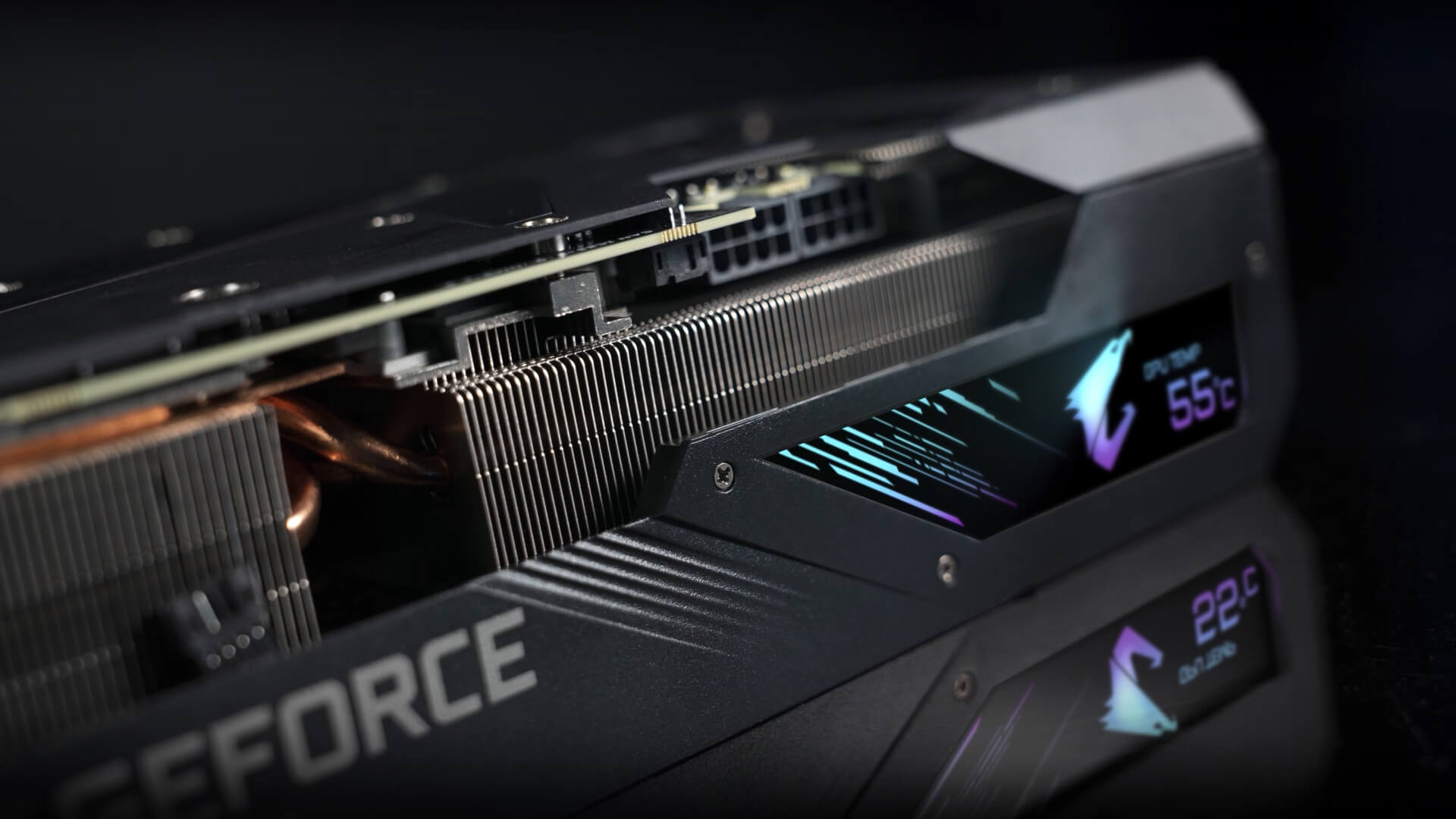 The new AORUS graphics card features not just a redesigned and luxurious aesthetic but a functional and useful LCD Edge View, the LCD panel on the top side of the graphics card. It has a host of useful functions such as GPU temperature, usage, clock, and even the FPS in-game.

Furthermore, you could add your own flair and customization on it such as text, icon, figure, or even the GIF, allowing you to build up a graphics card full of personal style. In addition to those, we added a special egg feature that acts as your pet and grows with you as you play more and use your GPU longer.

Happy_Potato ：
The aesthetic design is quite different then the AORUS GeForce® GTX 1080 Ti Xtreme Edition 11G that I have. I like the old and this new design. Its a bit simpler imo and maintains the RGB for those who like that. It looks like its a 3x slot width but still no 3 slot bracket? The triple fans are always nice but I do wonder why the left most fan is only 100 mm vs the other 2x 115mm fans? Still looking forward to the biggest and baddest version!
Reply
To reply this comment, please login.
Koji_Online ：
I love the aesthetic and work that went into the cooler design for these new 30 series cards; I\'m up in the air for the Master/ Xtreme and the Vision 3080s, just waiting to see which of these I can get my hands on first.
Reply
To reply this comment, please login.
To post a comment, please login.
Back