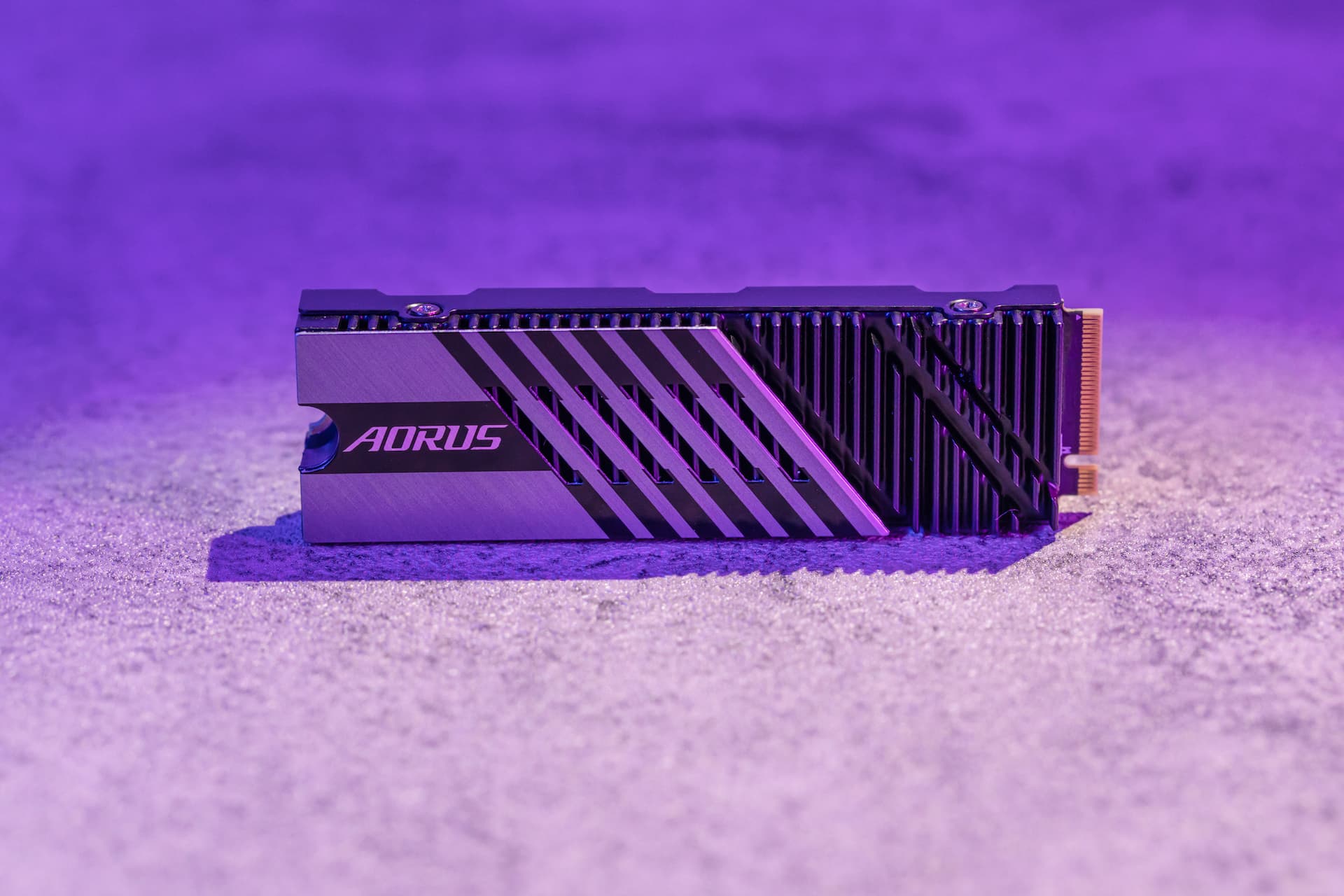 AORUS, GIGABYTE’s premium gaming brand, has launched the brand new PCIe 4.0 SSD – AORUS Gen4 7000s. It features blazing fast access speeds and shows no throttling even under heavy loads. Is this for real? Let’s find out.

AORUS Gen4 7000s is armed with the latest E18 PCIe 4.0 controller from Phison and the B27 NAND from Micron, which is able to boost sequential read speed up to 7000MB/s and sequential write speed up to 6800MB/s. Well, it looks amazing, but how fast is it in a real-world scenario?

The SSD is Much Hotter than You Expect Under Heavy Loads

Everyone thinks that the hottest components inside a computer are the CPU and GPU, but M.2 SSDs are also affected under long periods of heavy loads.

The surface temperature of the NAND and controller on the SSD can skyrocket to 80°C/176°F or even higher under heavy loads, and when these components get too hot, the SSD starts throttling to protect itself from overheating. Thus, you could actually see that the transfer of data slows down, or you could encounter stuttering while accessing a game. Sometimes, overheating an  SSD may even cause the system to crash. 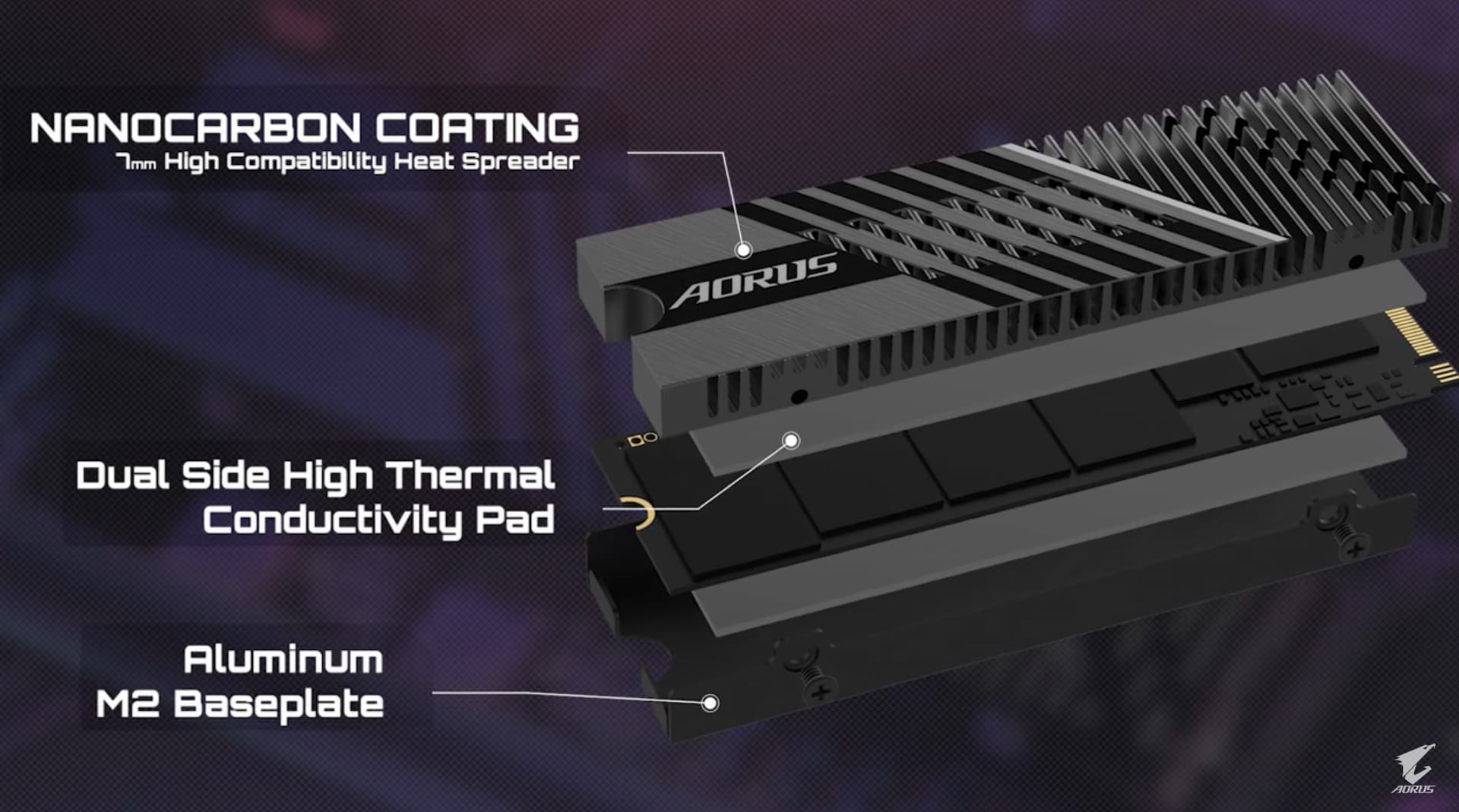 So, if SSDs will heat up under high-speed and heavy loads, will the AORUS Gen4 7000s suffer from high temperatures as well? Well, that’s what makes the AORUS Gen4 SSD stand out from the crowd: It can not only deliver 7000MB/s access speed but also shows no throttling while employing high-speed access under heavy loads, thanks to its optimal thermal design.

It’s equipped with a 7mm thermal module which is a nano-carbon-coated, double-sided high-K thermal pad with a full aluminum base plate. Our tests have shown that this thermal design can keep the SSD cool enough for five-and-a-half minutes of full-speed access without throttling.

Now, that doesn’t sound very long, but it also means that there’s already 2.4 TB of data being accessed by the SSD. Moreover, given that the maximum capacity of the AORUS Gen4 7000s is 2TB, you will never have the chance to see it throttling in a real-world scenario! You can fully enjoy the benefit of high-speed access to the AORUS Gen4 7000s SSD and not worry about throttling.

Not Just Fast, also Compatible with Other Components

There are only two ways to fix it: remove the thermal module of the SSD, or install the SSD on a lower M.2 slot. However, the removal of the thermal module may cause the SSD to overheat, and the downside of the M.2 readjustment is a lower bandwidth, which will ultimately lead to poor SSD performance. The optimal height of the AORUS Gen4 7000s brings no compromise to the rest of your components. It’s compatible with the most premium CPU coolers and graphics cards, allowing you to have all the premium components placed nice and neat in your case.

In conclusion, the AORUS Gen4 7000s features top-notch access speeds and shows no throttling, thanks to the advanced thermal design. It is also compatible with most CPU coolers and graphics cards, promising no compromise to hard-core gamers or hardware enthusiasts. Considering all this, the AORUS Gen4 7000s is truly the best premium SSD you can get in the market right now.